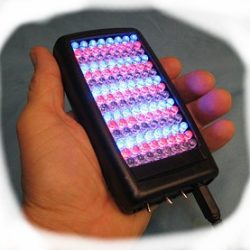 If you want to try Light Therapy, start with a Dual Red/NIR Array with half 660nm LEDs and half 850nm Near Infrared LEDs. The high-power version cuts down treatment time from 5-10 minutes to 1-2 per area. Red/NIR have the greatest utility in accelerating healing, reducing inflammation and infection, pain relief, skin care, hair growth, etc. Our High-power arrays cost $.05/mW… a lot of bang for the buck.

Elixa’s LED arrays put out approximately 1 joule per minute per cm2, more light per dollar than others. Our LEDs have a rating of 4000 mcd at 6.4mw. This equates to around 25 mW/cm2 ir 1 Joules per cm/2. This compares favorably with so-called Cold Lasers and Low-level Lasers. They do not pulse because that would add significant cost to the product, and we have seen no solid, double-blinded research that indicates a difference in healing effects between pulsed and constant light. We believe that healing depends mainly on the wavelength and the output power of the light.

Elixa’s Handheld LED Arrays have a Lifetime warranty. Parts and Labor covered except for physical damage or misuse. Return shipping not covered.

As research conclusions vary widely, the window of proper treatment time can range from a minute per cm2 in the HP (High-Power) arrays, to 5-10 minutes using the standard 120 LED units.

Posted at May 11, 2016 | by phil | 2 Comments
Blue light and Infection Abstract Blue light has attracted increasing attention due to its intrinsic antimicrobial effect without the 30 addition of exogenous photosensitizers. However, the use of blue light for wound infections has not
Read More

Posted at Mar 14, 2016 | by phil | No Comments
Research* and user reports indicate that red light can stimulate hair growth in both men and women with androgenetic alopecia (male or female pattern baldness) and non-patterned types of alopecia. Red 660 nm light increases circulation at
Read More

Posted at Feb 29, 2016 | by phil | 1 Comments
Light therapy (phototherapy) promotes healing and anti-aging, reduces inflammation, with no negative side effects. Non-invasive and painless, it improves skin appearance, reduces wrinkles and sun damage, and even kills the
Read More

Posted at Jun 04, 2013 | by phil | 10 Comments
The visible light spectrum ranges from short-wavelength violet to long-wavelength red. Photons of light from violet end of the spectrum have the highest energies and the highest frequencies, while red photons have lower energies and
Read More

Hazel Parcells Shares Her Secrets of Longevity (Hazel lived to 106!)

Posted at Oct 04, 2012 | by phil | 14 Comments
Special Focus on Longevity Alternative Medicine Digest; Issue #8 “You, too, can live to be 100!” Hazell Parcells shares Her Secrets of Longevity (Hazel lived to 106!) At 105, the Grande Dame of alternative medicine
Read More

Posted at Oct 04, 2012 | by phil | No Comments
Brooks Bradley’s Research Recently, a rather serendipitous occurrence revealed a possible synergistic effect through the combination of CS and LED protocols…..utilized simultaneously. During a recent evaluation of protocols directed toward alleviating the problems of long-term,
Read More