What is the Difference Between Ionic and Colloidal Silver?

Note: A colloid consists of both ionized and un-ionized particles. The solutions produced by the Silvonic Pro CS generator consist of approximately 85% ions and the rest uncharged particles.

Research shows that silver ions, not uncharged particles, kill pathogens. We cite the findings of Rice University below. Silver particles do nothing unless ionized. No research exists to show that silver ions join with chlorine in the body and become ineffective. This concept comes from sellers of particulate silver which must get ionized in the body in order to work.

According to Rice U research silver ions kill microbes, not uncharged particles.

Rice University researchers have settled a long-standing controversy over the mechanism by which silver nanoparticles, the most widely used nanomaterial in the world, kill bacteria. 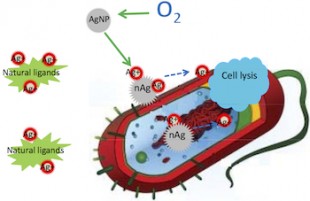 Their work comes with a Nietzsche-esque warning: Use enough. If you don’t kill them, you make them stronger.

Silver ions delivered by nanoparticles to bacteria promote lysis, the process by which cells break down and ultimately die, which makes silver nanoparticles a superior and widely used antibacterial agent. New research by Rice University found that silver ions, not the particles themselves, are toxic to bacteria. They also found that ligands in the vicinity of a bacteria can bind silver ions, preventing them from reaching their target.

Scientists have long known that silver ions, which flow from nanoparticles when oxidized, are deadly to bacteria. Silver nanoparticles are used just about everywhere, including in cosmetics, socks, food containers, detergents, sprays and a wide range of other products to stop the spread of germs.

But scientists have also suspected silver nanoparticles themselves may be toxic to bacteria, particularly the smallest of them at about 3 nanometers. Not so, according to the Rice team that reported its results this month in the American Chemical Society journal Nano Letters.

In fact, when the possibility of ionization is taken away from silver, the nanoparticles are practically benign in the presence of microbes, said Pedro Alvarez, George R. Brown Professor and chair of Rice’s Civil and Environmental Engineering Department.

“You would be surprised how often people market things without a full mechanistic understanding of their function,” said Alvarez, who studies the fate of nanoparticles in the environment and their potential toxicity, particularly to humans. “The prefix ‘nano’ can be a double-edged sword. It can help you sell a product, and in other cases it might elicit concerns about potential unintended consequences.”

He said the straightforward answer to the decade-old question is that the insoluble silver nanoparticles do not kill cells by direct contact. But soluble ions, when activated via oxidation in the vicinity of bacteria, do the job nicely.

To figure that out, the researchers had to strip the particles of their powers. “Our original expectation was that the smaller a particle is, the greater the toxicity,” said Zongming Xiu, a Rice postdoctoral researcher and lead author of the paper. Xiu set out to test nanoparticles, both commercially available and custom-synthesized from 3 to 11 nanometers, to see whether there was a correlation between size and toxicity.

“We could not get consistent results,” he said. “It was very frustrating and really weird.”

Xiu decided to test nanoparticle toxicity in an anaerobic environment – that is, sealed inside a chamber with no exposure to oxygen — to control the silver ions’ release. He found that the filtered particles were a lot less toxic to microbes than silver ions.

Working with the lab of Rice chemist Vicki Colvin, the team then synthesized silver nanoparticles inside the anaerobic chamber to eliminate any chance of oxidation. “We found the particles, even up to a concentration of 195 parts per million, were still not toxic to bacteria,” Xiu said. “But for the ionic silver, a concentration of about 15 parts per billion would kill all the bacteria present. That told us the particle is 7,665 times less toxic than the silver ions, indicating a negligible toxicity.”

“The point of that experiment,” Alvarez said, “was to show that a lot of people were obtaining data that was confounded by a release of ions, which was occurring during exposure they perhaps weren’t aware of.”

Alvarez suggested the team’s anaerobic method may be used to test many other kinds of metallic nanoparticles for toxicity and could help fine-tune the antibacterial qualities of silver particles. In their tests, the Rice researchers also found evidence of hormesis; E. coli became stimulated by silver ions when they encountered doses too small to kill them.

“Ultimately, we want to control the rate of (ion) release to obtain the desired concentrations that just do the job,” Alvarez said. “You don’t want to overshoot and overload the environment with toxic ions while depleting silver, which is a noble metal, a valuable resource – and a somewhat expensive disinfectant. But you don’t want to undershoot, either.”

He said the finding should shift the debate over the size, shape and coating of silver nanoparticles. “Of course they matter,” Alvarez said, “but only indirectly, as far as these variables affect the dissolution rate of the ions. The key determinant of toxicity is the silver ions. So the focus should be on mass-transfer processes and controlled-release mechanisms.”

“These findings suggest that the antibacterial application of silver nanoparticles could be enhanced and environmental impacts could be mitigated by modulating the ion release rate, for example, through responsive polymer coatings,” Xiu said.

Some thoughts from Phil Safier, Pres. Elixa, Ltd.:
If ionic silver does not work, someone should tell the thousands of users who get amazing results from using it. Experience counts more than theory.

Silver ions are about 0.26 nanometers in diameter. We have reason to believe that the Silvonic Pro produces CS particles in the range of .001 to .01 microns (10 to 100 angstroms).

We have not had our CS tested by a laboratory but know from physics and chemistry as well as the clarity of the solutions and the absence of discoloration when exposed to light that the particles of silver in the CS made by the Silvonic Pro fall within the definition of nano-size. Keeping the current extremely low produces small particles and long brew times. Ours takes around 3 hours to make a pint at room temperature.

First of all, not enough research exists to answer a lot of these questions, so any statements made by various vendors has to pass the smell test. Don’t accept anything at face value.

High ppm CS (over 50 pp, or so) usually indicates the use of some kind of binder to keep that much silver in suspension, typically egg protein, hence the “mild silver protein” description. Since pure particle silver has no anti-bacterial properties (only ions kill microbes), the egg material can actually become contaminated and grow micro-organisms! So-called “true colloidal silver” has to become ionized in the body to work. (See Rice University research cited above.)

10 ppm ionic/colloidal silver works just fine. Instead of using high ppm CS, just take a lot of it when needed. While I cannot prescribe or give medical advice, I would drink several ounces or more every hour or so, as needed during a health crisis, in addition to irrigating my sinuses, and nebulizing.

I do not bill myself as an authority because, in this field, no real authorities exist. Some of us have a lot of experience with a lot of users, and have common sense and science on our sides, but, regardless of how much we know, we also know that we do not know everything and that neither does anyone else… especially not the vast majority of doctors, pharmaceutical drug dealers, and regulatory agencies. They all have limited understanding of how the body works and how to achieve real health. They also have their own axes to grind and products to promote… as do we.

So who do you trust? Elixa has an excellent track record and lots of happy, repeat customers who refer their friends and relatives. That counts for something.